Mickman Brothers’ first location was on the farmstead my wife Su and I purchased in April of 1977. Directly across the street from Majestic Oak’s entrance sat our little plot of 4 acres with a little grey farmhouse and an antique red barn. The frame for this barn was of hand-hewn beams held together with wooden pegs. I planted a neat little 28 tree apple orchard just east of our driveway and my children and I spent many warm summer days watching all the apples mature; then we ate ‘em! Unfortunately, this little farmstead was torn down a few years ago.

Mickman Brothers’ operated from our little farmstead for 10 years. By the end of 1986, we were bursting at the seams on this little plot of land. It was time to make a move.

So, after the 1986 Season, brother Chris started searching for a new site for our growing business. Chris is very good at many things, and he excels at finding just the right thing when we need a ‘good deal’. One wintery day he burst into the office and announced that he had located a 21-acre parcel of commercial property right on Hwy 65 at the corner of Andover Blvd. “And for a great price too!”, he exclaimed.

We jumped into his pickup truck and drove two miles to examine the site. The land was flat as a board with a sandy hump on one end, onto which someone long before had built a little house. The rest of the property was a peat bog.

“The house has two bedrooms”, Chris said. “Each of us could have our own office!” This would be a big improvement because we had been sharing a small office for years in an old mobile home we had moved behind the barn at the farmstead. In this small office in the mobile home, it was sometimes difficult to get stay focused – with all that was happening in that cramped space most of the time.

We scrapped up all the money we could gather together and were able to come up with the 20% down payment needed, and purchased the property on which our company is still located. We were jubilant, as was our small staff. Preparations began to move the business from our little ‘house on the prairie’, into our fancy new corporate headquarters – in the small house on Hwy 65. My wife was pretty happy about the plan to move the business away from where she was trying to raise our four children!

Before the actual move, we developed a number of concepts for how we were going to transform the small house into an office building. “We’ll each have our own offices in each of the two bedrooms, and the living room will be the bookkeeper’s office”, I suggested. We agreed we would keep the kitchen as it was for the time being, because we’d need a place to take breaks and eat lunch. Chris and I figured the little house would work very well as an office for some time to come.

As we were making these plans, it occurred to us that because we were right on Hwy 65, people might want to drive in and purchase some of the nursery stock we would be holding for upcoming landscaping jobs. As long as we have such a great location, right on the corner, maybe we should start a garden center? Being young and entrepreneurial, Chris and I agreed that this was a good idea, even though neither of us had any retailing experience. “How hard could it be?” said Chris. “We’ll put the nursery stock out there and the people will drive right in and buy it.”.

We discussed this for some time and agreed we wouldn’t need a very big building because all we were planning to sell were trees and shrubs. Time was also getting short because it was now nearly April, and our Spring Season was just around the corner. “Well, let me see if I can come up with something that will work”, Chris said.

You have to remember that that brother Chris is really good at finding stuff, and normally he gets a really good deal. In addition, Chris thinks ‘out of the box’, often coming up with some pretty wild ideas.

Just a couple of days later, Chris came in all excited. “How about this idea?” he asked. “I found an antique caboose for only $3,500. We can move it here and run the garden store right out of it.” Geez, I thought to myself; this is a really wild idea, one that I doubted anyone had ever tried of before.

“I’m not sure Chris. It’s possible, and we could probably do it, but I don’t think a caboose sitting in the middle of a field surrounded by trees would be very appealing to the customers. Let me think about it for a day or two”, I suggested. Chris was still excited about the prospect and agreed that while I thought about whatever it was I was going to think about, he would work out the details of how to move the old caboose and how to deal with it once it arrived.

It took me a couple of days, but when the idea came, I got really excited, really fast. “Ok Chris, I’ve got it. We won’t just drop the caboose in the middle of the field. We’ll put it about 75 feet north of the house. Then we’ll build some kind of decking and trellising between the two and add a nice cedar fence behind the decking. With the length of the house, decking & trellising and caboose, our operation will be over 150 long and look really cool – and big. What do you think”, I asked taking a long breath.

Brother Chris had done his part too. “I talked to some guys and found one that has a big flatbed truck with train rails mounted on the bed. When he moves a train car, he tilts the bed down and has big hydraulic winch to pull the car up onto the bed. Then he drives to the new location, tilts the bed back down again and lowers the train car on the railroad tracks. I found some railroad ties and tracks; we can install them right where we want them, and our new caboose would sit there nice and pretty – like it was there all the time.”

The plan was taking shape nicely, but we didn’t have much time because spring was rapidly approaching. We soon came up with a loose conceptual plan that we liked. Then we went to work and built the decking, trellising, and fencing, measuring everything precisely in preparation for the arrival of the caboose. After building our short little railroad (40 feet long), the caboose arrived and was successfully launched on its new set of tracks. Wow, we thought it all looked great – and affordable! The whole deal cost just short of $20,000, the last of our life savings. 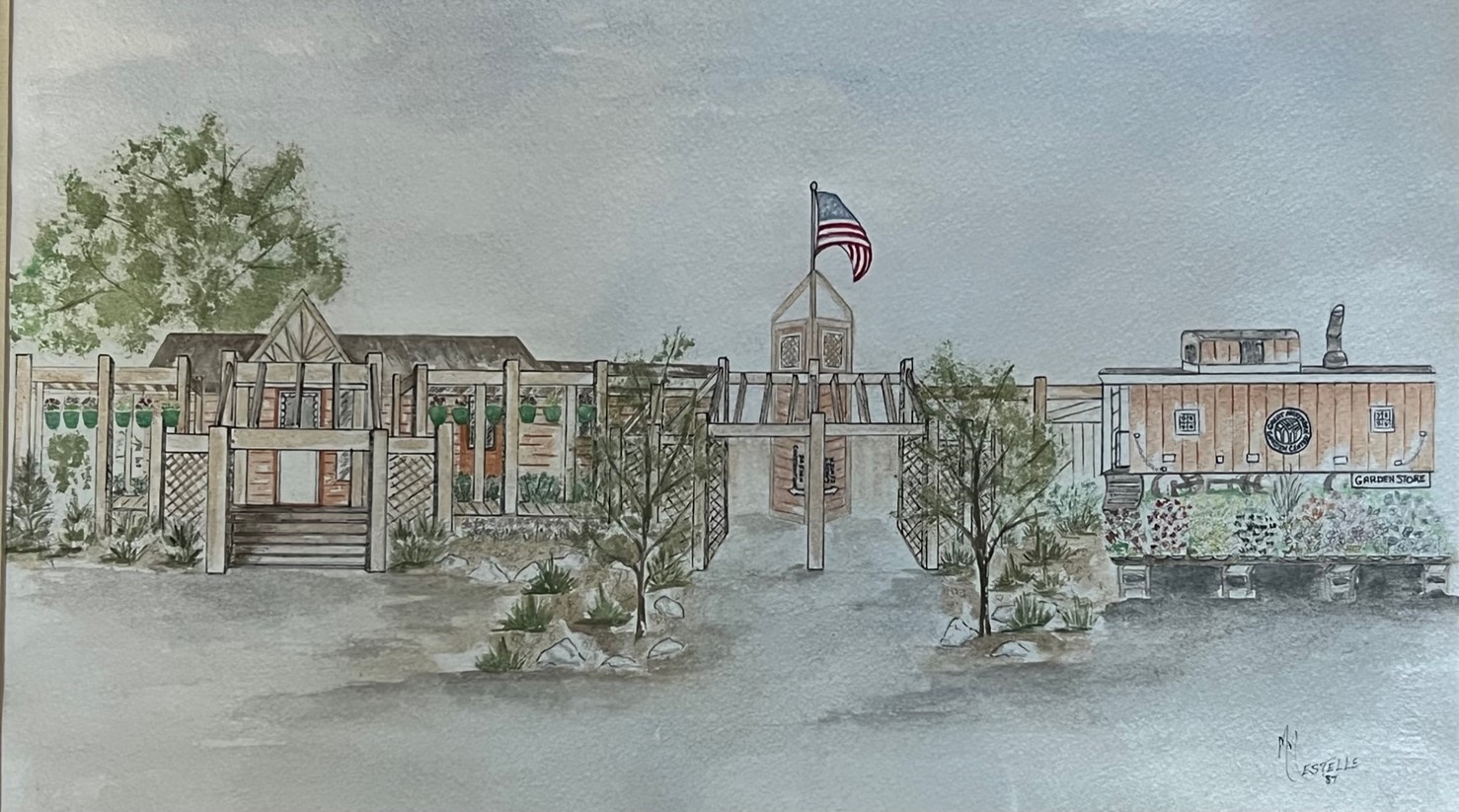 An artists rendering of the caboose concept with decking and trellising.

Another one of our buddies, an electrician, ran juice to the caboose and we bought an old, used cash register and put it on the table inside the ‘dining’ area of our new railroad car. We called up our brother Jim’s college buddy, Joe McCrossin who was in the asphalting business, McCrossin Construction.  Joe agreed to install a small asphalt parking lot for what we thought was a pretty good price (it’s nice to have buddies). He even agreed to give us a couple of months before we had to pay for the work he did for us. That was a good thing because we had spent all of our money by that time.

Well, despite the multitude of obstacles, we completed this project on the Thursday before May 1st – just in time for the Spring Garden Store season. Because all the commuters traveling down Hwy 65 had been watching all this craziness for the past few weeks, and due to an ad we placed in the Anoka Shopper, we had a very successful ‘Grand Opening’ our first Saturday. We sold almost $5,000 worth of trees and shrubs – and talked to a number of new, potential landscaping and Lawn Sprinkler customers!

We were in the Garden Center business!

Mickman Brothers in May of 1987

Mickman Brothers in September of 2022

That was all over 35 years ago. Much has changed over all these years, and with our many dedicated, hardworking staff members, we have thrived. Step by step, never taking too big a bite, we have grown our building campus to include 18,000 feet of glass greenhouses, a nice big warehouse including offices, and another attached office building, the Design Studio. And of course, our beautiful retail Garden Store – which we designed to look like an antique Railroad Depot (go figure!).

Business now happens at the speed of light, and it is difficult to keep up with the pace of commerce in our new world. But one thing hasn’t changed: We still have our original caboose, albeit in a different spot than it once was. When I’m introduced to people in our community, the most common response is, “Oh yes, I know Mickman Brothers. You’re the garden center with the caboose!”

Note: There is another thing about Mickman Brothers that hasn’t changed over the years; we never shy away from new, original ideas. I’m sure that our openness to consider new ideas, technologies and processes is one of the things that has enabled us to prosper all these years; that, and a lot of hard work and being nimble.

But above all, the reason for our success is that our loyal customers continue to choose our family business for their landscaping, irrigation and garden center purchases.

Many thanks to all. We sincerely appreciate it!

2 responses to “The Caboose”